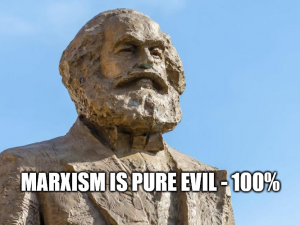 Making America Great Again is not for Cowards! By Roger Fredinburg

We keep hearing from conservatives, Trump supporters etc. that they want to see a push-back against the Marxist hoards destroying our nation – But most just stare into the headlights of the ongoing violent attacks and await their turn to be run over by the Liberal tidal wave.

We get it! Violence is abhorrent to many… so be it.

Clearly the real enemy is the Fake News Disinformation industry that monopolizes the narrative day in and day out. Folks think that there is no way to fight back – except with physical violence… NOT TRUE!

All of these are easily identified and can be quickly “unplugged” or disconnected from the grid without violence or bloodshed. If they can’t get their Bias message out – because they are prevented from transmitting & distributing their falsehoods… they may listen to a demand for UN-bias reporting to get back on the air etc.

All that is required is a tiny bit of research and a willing group of people who take the initiative and responsibility to shut them down and keep them from distributing their filthy “Hate America” lies – concealment’s – deceptions and selectively parsed so-called news reports.

So – if you want to fight back, shutting them down and keeping them down until they agree to tell the truth is the best possible method to force our Fake News Media Enemies to recoil and return to providing our great nation with an Objective form of news media.

It’s up to you! I can’t go into more detail… Either you have the IQ to grasp this concept – and the courage to deploy a plan to force a return to objective media for the good of the people of the USA – or you don’t. The fact is – If you want your freedom back – Fake News providers MUST BE DESTROYED! We must DEMAND OBJECTIVITY!

For broadcasting entities such as TV Stations – The FCC rules require that the use of the public’s airwaves “Serves the best interest of that public” So you might file complaints for Broadcast License revocation – but have the Bias recorded so you have evidence of their crimes. Also demand they put up disclaimers announcing their political leanings and preferences.

Future generations of Americans are counting on YOU to engage and step on to the battlefield to save America… Are you in?