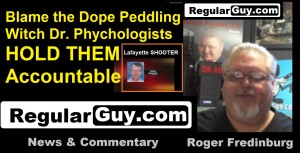 Gunman at Lafayette movie Theater is a victim of Psychiatric malpractice. All of the modern mass killers are like Manchurian Candidates, out to destroy American values, push Government to grab guns etc. But the real culprits are these witch doctors in white coats, these Psychiatrists who wreck people brains chemically and never get held accountable for their malpractice. If these nuts are out mixing in public it’s because the Psychiatric community is NUTS! and because of Political correctness run amok. Rise up and demand they be held accountable ( The Doctors).

“The gunman who killed two women and wounded nine people in a theater here Thursday night had a history of mental illness and financial trouble, officials said, and reportedly vented hatred of liberals and the government online, predicting the collapse of the United States.

The police identified the gunman as John Russell Houser, 59, of Phenix City, Ala.