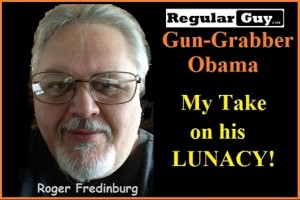 President Obama seems more like a Banana Republic dictator to me than a siting US President. He is inciting violence and armed Revolution in this Country. That is a Federal crime where I come from. His penchant for flipping the bird at the US Constitution on multiple subjects is unsettling at best, and may actually be treasonous at it’s core. The larger question for me is – Where in the hell is the Republican Congress? Impeachment at minimum is justified, and criminal charges for treason are more in line with the reality of his Presidential lunacy. Impeach this lunatic NOW! That should be the clarion call of all Patriots in the USA today. Where in the hell is the silent majority?

Candidates and others are weighing in on Obamas power grab!

“We’re not changing the Second Amendment,” front-running Donald Trump said Saturday at a campaign rally in Biloxi, Miss. “I will veto that. I will un-sign that so fast.”

“The president has a pattern of taking away rights of citizens,” GOP candidate and former Florida Gov. Jeb Bush told “Fox News Sunday.”

Donald Trump on Sunday told CBS’s “Face the Nation” that if elected he would use the same executive powers to repeal Obama’s likely new executive orders on gun control.

“The one thing good about executive orders: The new president, if he comes in — boom, first day, first hour, first minute, you can rescind that,” he said.

GOP candidate Carly Fiorina told CNN’s “State of the Union” that Obama “has been a lawless president” in his use of executive orders.

“It is delusional, dangerous, not to mention unconstitutional,” she said. “We have long lists of criminals who own guns, who routinely purchase guns. We know who these people are, and we are not prosecuting any of them.