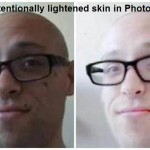 Roseburg Oregon Mass Murderer – Better know recently by his Muslim name Saiv Sharma – Is formerly “or officially” recognized as one Chris Harper-Mercer. His social media footprint leaves behind a portrait of a deranged psychopath who was obviously building himself up to commit this heinous act.
Authorities have found at least one detail that the media doesn’t want to report on — It was discovered on a MySpace account on which he was associated with an Islamic terror group.
According to The Daily Beast, Harper-Mercer’s account on the social media site included two contacts, one male and one female. The male, Mahmoud Ali Ehsani, had pictures of “Mujahideen” from around the world on his account, as well as a post in which he wrote “kill the Jews.”
Harper-Mercer’s page on the site contained praise for terrorists, albeit of a different stripe — the gunman who killed up to 10 people and wounded several more … at Umpqua Community College had material glorifying members of the Irish Republican Army.
A blog linked to Harper-Mercer also contained praise for Roanoke shooter Vester Lee Flanagan, saying that people “like him have nothing left to live for.”
“On an interesting note, I have noticed that so many people like him are all alone and unknown, yet when they spill a little blood, the whole world knows who they are,” Harper-Mercer wrote.
“A man who was known by no one, is now known by everyone. His face splashed across every screen, his name across the lips of every person on the planet, all in the course of one day. Seems the more people you kill, the more you’re in the limelight.”
The Washington Times also reported that Harper-Mercer’s shooting was likely a hate crime, as he specifically targeted Christians during his rampage. 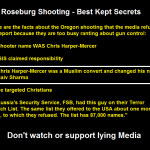 One Mother, in a news report – The mother of a witness to the shooting, told reporters that the killer asked potential victims whether or not they were Christian.
“And they would stand up and he said, ‘Good, because you’re a Christian, you’re going to see God in just about one second.’ And then he shot and killed them.”
Of course, President Obama and the shooter share a unique similarity, another interesting tid-bit that is being actively covered up in the media, that they are both half black and half white! (And maybe both are Muslims and /or sympathizers too) This has been mentioned very little, yet seems like an important distinction to me.
Obama and the liberal media have joined forces in the style “Saul Alinski” – using the crisis to advance their anti second amendment rhetoric, blaming the entire incident on guns, refusing to report almost everything that contradicted that — especially the suspect’s link to a supporter of Islamic terrorism.
Wouldn’t it be nice if once and for all, for the mainstream media would report all of the facts behind a mass shooting — not just the ones that fit their narrative.
CNN and other outlets have even tried to cover up the race issue by altering photo’s of the killer. (See above)
And adding salt to the wounds, the Obama administration was warned about this shooter in recent efforts by Putin’s Russian Government to share terror watch data with the USA. But the Obama folks blew the Russians off… Go figure… Will any media tell us the facts? Doubtful… sad to say.