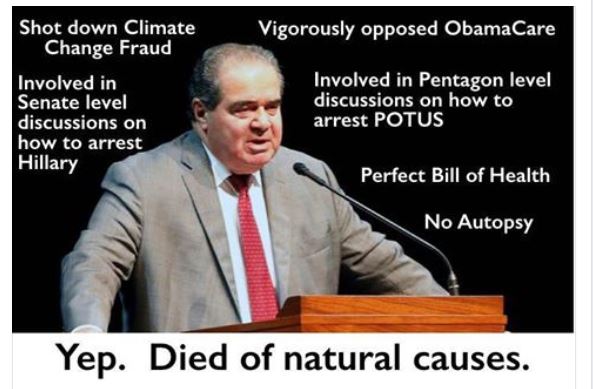 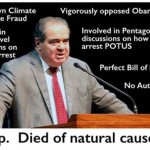 The Conspiracy theory developing around the sudden death of Supreme Court Justice Antonin Scalia is a thriving conversation. I am happy to fuel the fervor that Scalia was murdered, assassinated, killed in his sleep by forces of the far left who recognized Justice Scalia as the most powerful force for conservative and traditional American values on the Supreme Court. I was friends with many people who crossed the powers that be and are now dead – the short list, Danny Cosalaro of the Inslaw software scandal involving Ed Meese and the BCCI cover up – Gary Webb of the San Jose Mercury News who broke the CIA and Crack Cocaine connection and Bill Cooper, author of Beyond a Pale Horse… and there are many more. Yes – I think Scalia was murdered – Deal with it!