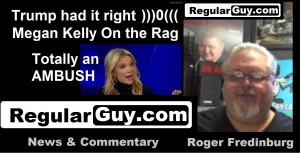 Clearly, the Fox and Facebook GOP 1st debate was rigged to destroy Trumps Front-runner status. Behind the scenes, we can imagine the pressure from big spender advertisers and Republican Elitists threatening to pull ad dollars and other forms of support for Fox if they failed to crash “The Donald”. Imagine – they went from 3 Million viewers last time the conducted GOP Primary debates to 24 Million – The only difference… Donald Trump. The ambush works to a certain degree, many of us who are fascinated by Trump now are demanding an outline at least, we want to see that he really has a plan and we had better see it soon. Otherwise, his campaign will fizzle in my opinion. Yes, the 1st question was designed to turn the die-hard republican audience against him out of the gate – And the lame ass effort by Megan Kelly to make Trump out to be a feckless misogynist will ruin her career I think… We’ll see… Watch and listen to the show – you tell me!