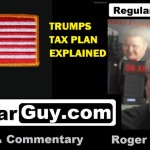 Donald Trump has been under attack by the status quot establishment political class for not being specific enough about his proposed tax and trade policies. The facts of the matter are simple and very compelling.

The truth is – Trumps tax and trade policies a the closest thing to what our nations founders envisioned that Americans have seen in decades. The Trump plans put America 1st in trade policy, and respect then founding principles of early America on tax policy. Our founders did not want to tax “Internally” and opposed placing a burden on the sweat and toil of the individual. Labor and basic subsistence was never to be taxed. Listen to this show as I explain this with examples from our founding fathers.